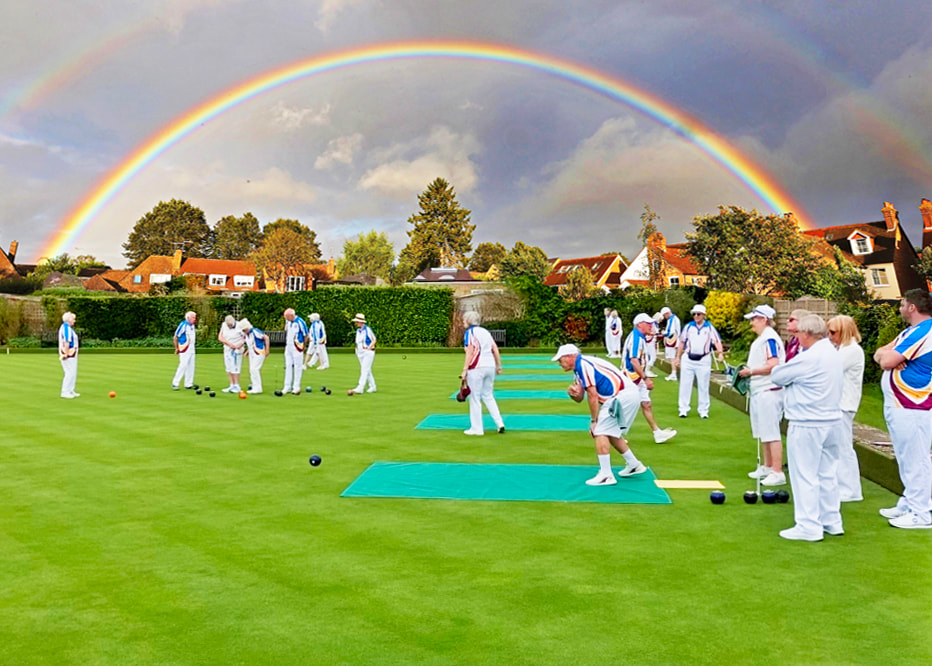 New members, of all abilities, are always welcome - watch here for details of open days.
Please contact us for any further information you require

CLUB NEWS
NEWS REPORT 15th AUGUST 2022
In one of the driest summers on record, extraordinarily we have had a rain effected match this year. We have to go as far back to 4 May when a mixed triples match against Townsend had to be curtailed at end 12 due to heavy rain! As always, we are grateful to our members for sending their news for publication.

Ladies Double Rink teams advance to next round
Another success story!  In the SADLBA Ladies Double Rink competition, which involves one home and one away match played at the same time, we had an overall victory over Potters Bar which means we progress to the next round against Welwyn and District on 22 August.
Away: Denise Moores, Dena Roberts, Jennie Redford and Linda Brooks.
Home: Pauline Taylor, Viv Dale, Jenny McEvoy and Beryl Driscoll.
Harpenden men reach Maynard Cup semi-final with a game in hand
Harpenden's men powered ahead to secure a 6-0 win away at Welwyn and District with a +15 shot difference across the two rinks. The rink of Brian Moores, Steve Maynard, Trevor Tharby and Nick Muir won 25-19 whilst the rink of Geoff Johns, John Campbell, Simon Burgess and John Osborn won 23-14. Harpenden have secured a maximum 18 points from three games against Welwyn Garden City, Potters Bar and Welwyn & District and have an impressive cumulative shot difference of +70. As a result, Harpenden have qualified for the Area semi-final (Maynard Cup) with a game in hand.
Following the final group game (away at North Mymms on Tuesday 9 August), Harpenden will play the semi-final and either the final or third place play-off of the Maynard Cup on 27 August. This is being hosted at Harpenden. Please note that this date has been changed from 10 September due to a clash with the final stages of the Middleton Cup at Leamington Spa with Hertfordshire having reached the semi-finals.
For links to Bowls England, County, District, etc. see LINKS
See SOCIAL for updated news on forthcoming social events